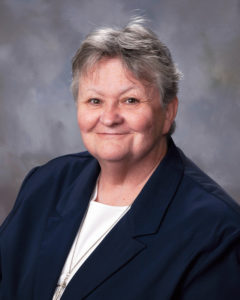 Mary Winifred Feeney was born on October 30, 1948.  Joseph and Anna Marie (Kliebenstein) Feeney raised Mary Winifred and her brother in St. John the Baptist Parish in Philadelphia.  “Winnie” attended St. John the Baptist Elementary School and Hallahan High School for Girls from which she graduated in 1966.  Later, while in Community, Sister earned her degree from Immaculata College.

Sister began her ministerial journey in the fall of 1969.  Sister Maria Joseph taught children in grades 1, 4, 7, and 8 throughout her teaching apostolate.  Sister also had the privilege of teaching adults in one of our Literacy Programs.  Sister’s teaching experience very well rounded.

Outside of the Philadelphia area, Sister taught at Immaculate Conception in Somerville, St. Stephen in Port Carbon, Epiphany in Miami, and Villa Maria Academy Lower School in Immaculata.

Sister Mary Winifred became noticeably ill at this point in her ministry and joined the Camilla Hall Community where she received the care she needed.  Sister participated in the Apostolate of Prayer and assisted where and when she was able.  Sister succumbed to the ravages of cancer on February 5, 2022.  Sister went to heaven with full hands and a full heart.