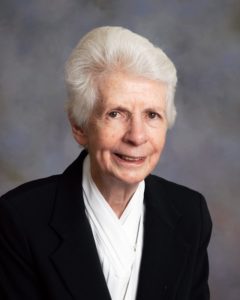 Rita entered our IHM Congregation on September 8, 1954; she received her religious habit and her religious name, Sister Rita Regina, on March 8, 1955.  Sister pronounced her First Vows on March 10, 1957.  Almost immediately after making her first vows, Sister went to Allentown Catholic High School in March 1957 to teach Music and English.

From the fall of 1957 through the end of the school year in 1962, Sister taught at Villa Maria Academy in Malvern.  During Sister’s five years at the Academy, she taught children in grades 3-4 and Music; and 7-8 and Music.

When Sister Rita left the Academy in 1962, she went south to SS. Peter and Paul in Decatur, Georgia.  Sister taught children in grades 5-6, her classroom-teaching schedule included teaching Music as well.  Sister served tirelessly in Georgia until 1971.

During Sister Rita’s tenure at Our Lady of Lourdes Regional High School from 1988 through August 2002, Sister served as Prefect of Studies until 1990 then as Principal until August 2002.

After leaving Lourdes, Sister brought a brand new set of gifts and skills to Bishop McDevitt High School and beyond.  Sister ministered as the Development Director/Alumni Relations during her four years at McDevitt.  In the fall of 2003, Sister Rita left her beloved McDevitt and returned to her beloved Immaculata University where she served as the Director of Planned Giving until August 2017.

Throughout Sister Rita’s ministerial journey, no service was beyond her or beneath her.  Sister served wholeheartedly and diligently.  In August 2017, Sister went to Camilla Hall.  Sister’s new ministry was the Apostolate of Prayer and Service.  Sister joyfully carried out her new mission until she closed her eyes for the last time on Thursday, February 25, 2021.

Sister Rita’s Funeral Liturgy was celebrated at Camilla Hall on Tuesday, March 2, 2021 at 10:30 a.m.  Two priests from the Diocese of Harrisburg, friends of the O’Leary Family, Reverend Philip Burger and Reverend Jonathan Sawicki honored Sister Rita and her family by their prayerful presence and concelebrating this Funeral Mass.  Reverend William Trader, O.Praem and Reverend Christopher Rogers, faithful friends of our IHM Sisters and our Congregation also concelebrated this beautiful Liturgy to honor this beautiful IHM Sister.

Sister Rita O’Leary’s dear parents James and Emma (Hatton) O’Leary and her brother James predecease her.  In addition to her Congregation of IHM Sisters, her beloved brothers and sisters-in-law Joseph (Victoria), John (Joanne), Jerome (Anna Marie), Raymond (Mary Ann) and Olga (James) mourn her passing and give thanks for her life of love and faithful service.